The Princess and the Pea

It's time for me to show some new work!
Some of you may know that I've been working like crazy to get my embroideries ready for a new exhibition by my textile group 'NINE'. Our exhibition is being held at The Gibberd Gallery in Harlow Essex from 1st-25th November 2011 (Monday -Friday 10am -4pm). The title of our exhibition is "Textile Tales and Stitched Stories".
We each had to produce a stitched panel based on a Fairy Story. 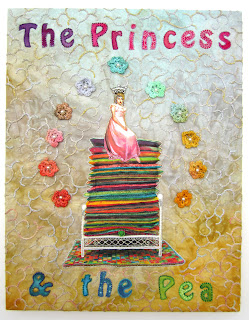 I chose to embroider The Princess and the Pea.

Quite a few of us found it to be a real challenge, including myself! I find it very difficult to do representational work, and much prefer to stitch abstract design. This was the best I could do! I made 20 little quilts and a felt pea which I placed on a dolls house bed, placed on a canvaswork mat. 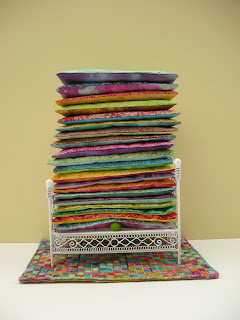 I photographed the bed and then by the miracle of Photoshop, printed it onto fabric and then embellished it with further stitching, adding a Princess and a crown.
The first thing you see when entering the exhibition is our group of Fairy Tale panels. 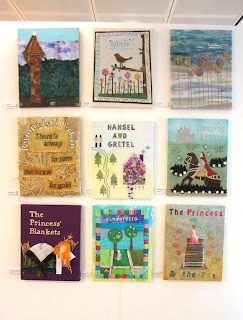 I will be adding more pictures of the exhibition in the next few days, along with further details of my work!
Posted by The Rainbow Girl at 13:49 1 comment:

I decided a while ago to make an embroidered piece to put in my Etsy shop. I have sold hand dyed supplies for about 18 months, and wanted to see how much interest there would be in my embroideries. As they are so time consuming to make , and I have other commitments, I will only be able to make a few now and again.

So I decided to take some photos of work in progress, although I missed out a few vital steps along the way, as I was so busy stitching, that I forgot to photograph! I used a technique based on cutwork circles, that I used a lot for the 'nine' exhibition.

I picked out a piece of blue fabric and some blue and purple threads. I am very naughty, and don't do preliminary sketches or write down ideas very much. I just like to play with colour and stitches on a spare piece of fabric (or quite often on the edges of the piece I'm working on!) and take things from there.

I drew a large circle on the fabric with washable marker and superimposed smaller circles (for the cutwork) on it, as the starting point. I then worked these in a variety of  purple threads.

I filled this with more small circles. You can see the faint pen marks. These were worked in blue thread, and the very centre in purple again. I wasn't sure what to do next (my work evolves as I stitch!), so rummaged through my fabrics, and found a bright green piece which provided quite a contrast. I decided to put this piece underneath the blue fabric, so you could see it through the holes.

At this point, I drew a square border around the purple circle and worked lots of blue circles randomly within the square until it was full. I cut round the edge very carefully, and buttonholed the entire edge to strengthen it. Then I placed it on a square of green fabric and attached it with lots of French knots.

I stitched this to a piece of calico stiffened with pelmet vilene and backed it with another piece of stiffened calico.

More photos in my shop, therainbowgirl.etsy.com

Some of my previous work

I thought it was about time that I posted some pictures of my previous embroideries done a couple of years ago. The first exhibition I was in was a bit daunting, as I had only just finished my City & Guilds, and wasn't sure which techniques I wanted to explore. I made a fabric book for my final piece which had lots of hand dyed fabrics and threads, and I knew I wanted to carry on using them. I had also explored the use of 'funky foam' to give a raised surface, so my first two pieces (which hang as a pair) used both hand dyed fabrics and funky foam. The designs and colours are based on patterns found on traditional bags from Afghanistan. 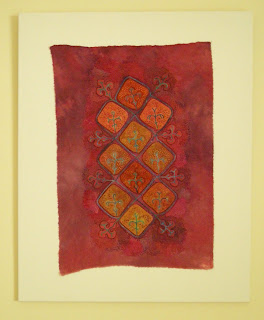 Detail below of 'Afghan 1' 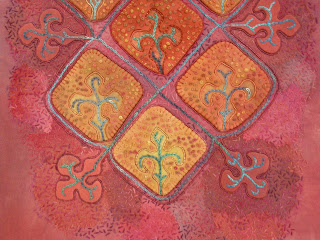 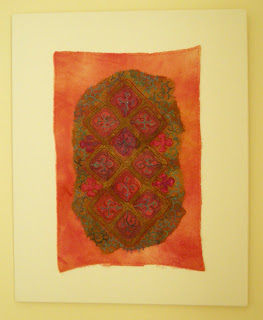 'Afghan 2' with detail below 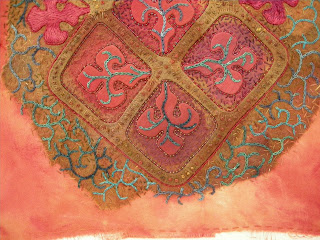 In both of these embroideries, I have used chain stitch, straight stitch, seeding, couching and French Knots. They are mounted onto artists' canvas.

The other technique I found interesting was making coiled fabric vessels from strips of dyed muslin wrapped around plastic washing line. I went to a class by Helen Deighan, and went mad, making lots of vessels in different sizes, including several Christmas presents for the family! 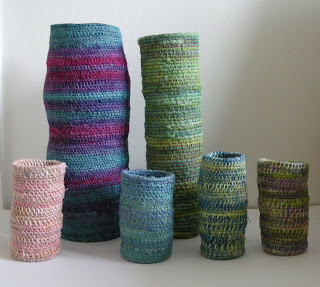 My favourite vessel is shown below, and I think I want to make a really big one (about 2 feet tall!) as I still want to play around with this technique.

The textile exhibition by "nine" only has a few more days to run. It will now be open on Sunday 20th September as well as Monday to Saturday 10am -4pm. Come along to see more work from our talented group!

We all made a doll based on the 9 Muses, and they are all very different!
A piece of work from each member of our group shows the diverse styles of textile and embroidery within the group, although we do seem to be biased towards the colour blue!
Pictures are not the same scale, but you can get an idea by the size of the bricks on the wall. 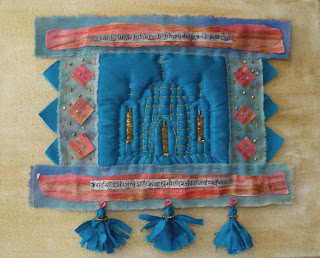 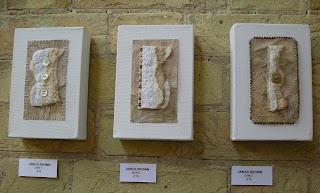 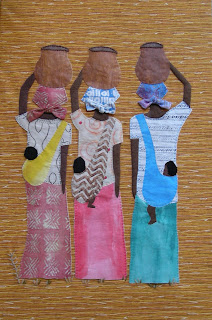 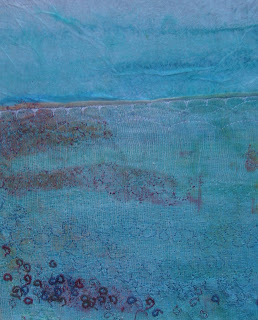 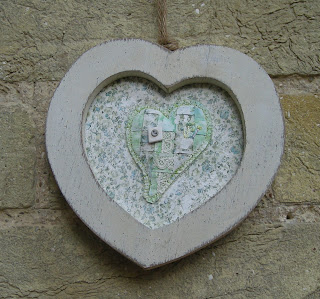 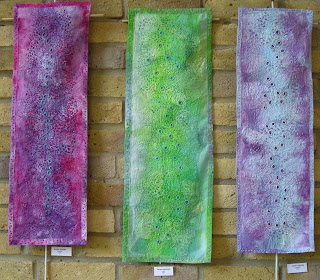 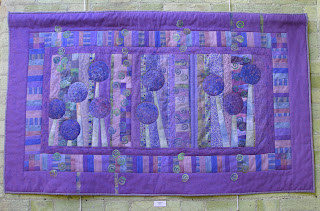 I wanted to put the artist's name under each exhibit, but as I'm new to this "blog thing", I haven't quite worked out how to do that yet, without completely mucking up the layout!
Maybe by the time we have our next show sometime in 2011, I'll have mastered it.

Making Our Mark - A Textile Exhibition by nine

After nearly 2 years of planning, we finally put our exhibition up this morning! It's only our second exhibition, so we're still fairly new to this kind of thing. However it looks a lot more professional than our first exhibition in 2007. 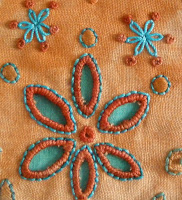 'nine' was formed in autumn 2005, by 9(!) friends who had spent the previous few (or many!) years studying for our City & Guilds Embroidery qualifications in Harlow, Essex. We all emerged with Part II or a level 3 diploma, depending on the year (and hence syllabus followed) that we finished. It was a lot of hard work and many thanks are due to our tutor Liz Neave who is also part of our group.

We all wanted to develop the skills we had learnt, and decided to form a group that would give us the impetus and support to go and do our own thing, but with a common purpose. We decided to hold an exhibition every 2 years, so that we would have some thing to work towards, but could go at our own pace. Some members are very prolific, producing many pieces of work, while others can only manage 3 or 4 pieces, due to other commitments. We have all managed to form our own personal style, which was something I was very keen to do. 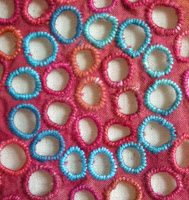 So on to the Exhibition!

It's called "Making Our Mark", being held at St John's ARC, Old Harlow, Essex CM17 0AJ, from 5th -19th September from 10am -4pm (closed on Sundays). Admission is free. If you are in the area, please come and support us. We would love to see you! 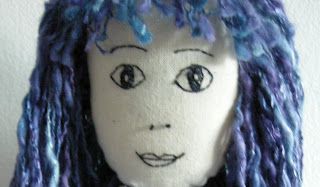 These are just a sneak preview of my exhibits! Let's get started properly with an introduction!

Well I started this blog last year and haven't added anything since then. Now it's time to give this thing a proper go. As I'm new to blogging, it might take a while for me to work out how to make it look reasonable!

I retired from my job as a school science technician at the end of July to concentrate on my real love. I'm mad about textiles, having a level 3 diploma in C & G embroidery. As well as embroidery and all stitched textiles, I also love knitting and have rediscovered bobbin lacemaking. I can't crochet very well!

I am programme secretary of our local  Embroiderers' Guild ( Bishop's Stortford & District) which is struggling for membership at the moment. We are desperate for new members to join, and existing or old members to renew their membership this year. If we stay at our current membership of 29, this could be our last year, and we may have to fold. I'm sure I'll add more to this subject soon.

I also have an Etsy shop, where I sell hand dyed fabric and threads which is known as therainbowgirl. I love dyeing fabric and threads as you never quite know how they're going to turn out, and you get some wonderful colour combinations which are sometimes unexpected, but gorgeous!

My greatest passion is contemporary embroidered textiles, which I enjoy designing and stitching. All my current work uses my hand dyed resources, including some hand dyed vintage textiles. I am part of a textile group called 'nine', and am currently very busy trying to get my embroideries ready for our exhibition in September. More details will be posted shortly!

Well, I finally decided to start a blog. I don't really know how to do half the stuff to set this up and make it look good, but I'll give it a go!

Having started to set this up at the end of the afternoon, it's now time to make dinner, so I think I'll give my brain a rest and continue tomorrow. It's Saturday tomorrow, and my husband will be watching football, so I can spend the afternoon on the computer. On the other hand, the weather is supposed to be sunny tomorrow, but raining all day on Sunday, so it might have to wait until then!
Posted by The Rainbow Girl at 10:14 2 comments: